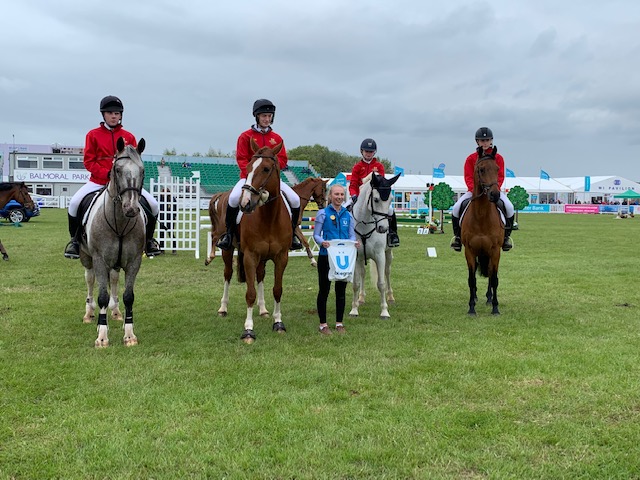 With a number of new horse and rider combinations it took a few weeks of the league to get warmed up. On the 17th November the Novice team of Zara Greenfield, Gracie Lamont, Charlie Black and Beth Hayes were the tack and turnout winners. The open team consisting of Charlie Black, Anna White and Tom and Ben Rowlatt-McCormick secured a 4th placing to start the year’s success for this team. At the final on the 8th December this open team finished one place higher in 3rd. The late start meant they finished a credible 8th in the open league. Ben and Tom Rowlatt-McCormick had a number of placings in the 1.10m premier league. On the 3rd November Ben secured a 6th placing; on the 17th November Ben won and Tom was 4th; and the final Tom was 5th. They both finished just out of the league placings.

The open team decided to try the qualifiers for the prestigious Balmoral Show school Showjumping Championship. The first one was at Gransha Equestrian Centre were they finished a credible 4th. The St Patricks day show at the Meadows Equestrian Centre was the next qualifying competition and the team secured one of the five qualifying places available to NI school teams. The team finished 7th in Balmoral. The St Patricks day show was also a successful day for the novice team consisting of Erin Barlow, Gracie Lamont, Anna Cardwell and Amy Tubman, achieved a 4th placing in a hotly contested jump-off.

We would like to thank all the team for their commitment and determination. All this success would not happen without the dedication from parents and we would also like to say a big thank you to them for transporting them to the competitions and most of all their support on the day. Let’s hope next year will be as successful, and any new members will be made most welcome!