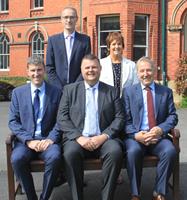 Speech Day was held at Friends’ School on Friday 6 September, when certificates and progress files were handed out to those who had completed AS and A-level examinations in 2019. The Guest of Honour was Professor John McGrath from Queen’s University Belfast.

The Chairman of the Board of Governors, Philip McDonagh opened proceedings by congratulating pupils on their achievements and thanking the staff for their hard work over the past year. The Chairman said that Friends’, founded in 1774, would be celebrating its 250th anniversary in 20124 and by reflecting on what it means to be a Quaker School today. He said that, in many respects, Friends’ had much in common with other schools: it was largely funded by government, it delivered the same curriculum, prepared pupils for public exams and was subject to the ever increasing list of regulations and policies that were required. There were, however, things that made the school distinctive:

“As Quakers, we believe that there is that of God in everyone. We therefore seek to support an ethos within the School that values every individual, both pupils and staff, and recognises that each of us has the potential to live fulfilling and rewarding lives. This should lead us to respect everyone, and to the development of good and inclusive relationships within the school. In practical terms, we believe in providing service to the community and we encourage pupils to participate actively by supporting organisations like Quaker Service, which works with disadvantaged families and young people in North and West Belfast.”

John McGrath received a warm reception and gave an inspirational, informative and entertaining speech to those gathered in the assembly hall. He talked about his work at Queen’s University, where he has led the development of sustainable chemical and biological recovery of high-value compounds, such as phosphorous, from waste. He explained the essential role of phosphates in today’s world, and recounted the story behind the initial – and accidental – discovery of phosphorous by Hennig Brand in 1669.

Stephen Moore, Principal, welcomed new members of staff and thanked those who had moved on, including Lynn Gamble, who had retired in March from the Maths Department and Lynne Turner, who was leaving at the end of October to join the staff of Regent House. He also paid tribute to Vice-Principal, Aidín Collins, who will be retiring at the end of October after thirty years at Friends’, and thanked her for her contribution to the life of the school over that time.

Mr Moore also expressed his gratitude to Principal’s PAs Margaret Johnson, who had retired at the end of June, and Audrey Reddock, who will be retiring at the end of September, having served under three Principals since starting at Friends’ in 1991.

With the 139 young people who had completed A-levels also moving on from Friends’, the Principal said that it felt like the end of an era, and that this was symbolised by the copper beech, which had stood for 150 years at the front of school and had been taken down over the summer. Just as a new tree would be planted and take root here, so the new pupils coming in would grow and flourish, drawing inspiration from the young people who were leaving Friends’ and moving on to the next chapter in their lives.

The Principal went on to highlight the School’s performance in examinations:

“133 pupils sat AS level exams this year, and the overall performance very pleasing, 40% of the grades awarded were As, with 69% at A-B and 87% at A-C. A total of 26 pupils achieved at least 3 A grades, of whom 10 gained 4 As: Frances Atcheson, Kate Boomer, Paul Cox, Aiofe Doyle, Kathryn Glover, Sarah King, Ross Little, Ethan Millar, Jack Netherton and Conor Quinn. I have no doubt that this cohort will follow the example of our Leavers here today, whose hard work paved the way to success at A-level.

“Results at A2 were, indeed, excellent: 88% of the pupils who sat exams achieved 3 or more A-levels at A*- C, with 46% of entries at A*-A, and 77% at A*-B. Ten pupils gained three or more A* grades, which is an outstanding accomplishment, given that this requires them to score over 90% in their A2 modules. Louise Treacy achieved 4 A*s and 1 A, Joshua Lindsay 3 A*s and 1 A, and Kathryn Allen, Lea Carson, Zoe Dickey, Emma Greer, Taylor Lunney, Alannah Millar, Benjamin Mulholland and Zoe Totten all achieved 3 A* grades. In all, 38 pupils achieved 3 or more grades at A*/A.

“The list of Leavers’ destinations makes fascinating reading, and I hope that our pupils will appreciate the privilege it is to be entering this exciting phase of their lives. Many will be starting very competitive courses at top universities, including Louise Treacy, who will read Natural Sciences at Cambridge, Emma Greer who will study Geography at the same university, and Peter McClure, who will go up to Oxford to read Modern Languages. It is also interesting to note new developments: three of our leavers – Ethan Gourley, Dylan Morrison and Matthew Steele – were successful in gaining places as part of a partnership between PWC and Queen’s University, where they will ‘earn as they learn’, with tuition fees covered as they work and take a degree at the same time. No matter which path they have chosen, we wish everyone well as they embark on gap years, employment or the next stage in their education, and I look forward to hearing of their adventures and successes in the future.”

The Principal said that the past academic year had been a memorable one, and cited the successes pupils had enjoyed in music, sport, the arts and a range of competitions:

“The creative arts play an important part in life at Friends’, as you will have seen from the performances of our Chamber Choir and Jazz Band. The Christmas concert in a packed assembly hall is always a real treat; and once again last year, a sold-out Ulster Hall was the venue for our Spring Concert, where an innovative and eclectic programme had the audience enthralled. Many of the pupils here today were among the 300 or so whose exuberance and technical accomplishment made the night one to remember. It was pleasing to see our leavers lingering on the stage at the end, talking to their teachers and tutors, and to appreciate how much their involvement in music has enriched their time at school.”

The Principal also talked about the opportunities they had enjoyed through travel and other aspects of the enrichment programme, highlighting some of the areas in which they had engaged with important social issues:

“The Charity Committee, organised events to raise funds for organisations including Quaker Service and Habitat, and they made an enormous contribution to an unforgettable Glow with the Flow event held in March, when over 600 Friends’ pupils danced and ran their way to raising over £8000 for the mental health charity Cause. Over the summer, some of our Year 13 pupils spent a week of their holiday at Quaker Cottage; and four of our pupils were awarded bursaries to undertake charitable work overseas by the DGO Foundation, an initiative run by Old Scholar Charlotte Lewis and her husband, Rob.

“The Eco Committee led assemblies, organised our annual Big Pedal, sold reusable water bottles, organised a beach clean, invited speakers from the Council and environmental charities to talk about waste management and held an Earth Hour to raise awareness about the use of electricity. Our Year 13 Politics in Action group, part of our Shared Education Initiative, worked over the course of the year with counterparts from St Dominic’s to conduct a SWOT analysis of Brexit, and presented their findings to a group of MLAs and journalists at the Long Gallery in Stormont.”

The Principal finished by saying that the occasion marked an important time in the lives of those leaving, and that although there was much uncertainty in the world, he hoped that their experiences at Friends’ would equip them with the knowledge and values to make a positive contribution wherever they found themselves.

Head Girl Cathy Fox and Head Boy Ross Little thanked Professor McGrath for taking the time to come to Friends’ and, on behalf of the pupils, staff, parents and guests, expressed their appreciation for what he had said. Following the ceremony, pupils, parents and guests gathered in the Dining Hall for afternoon tea. 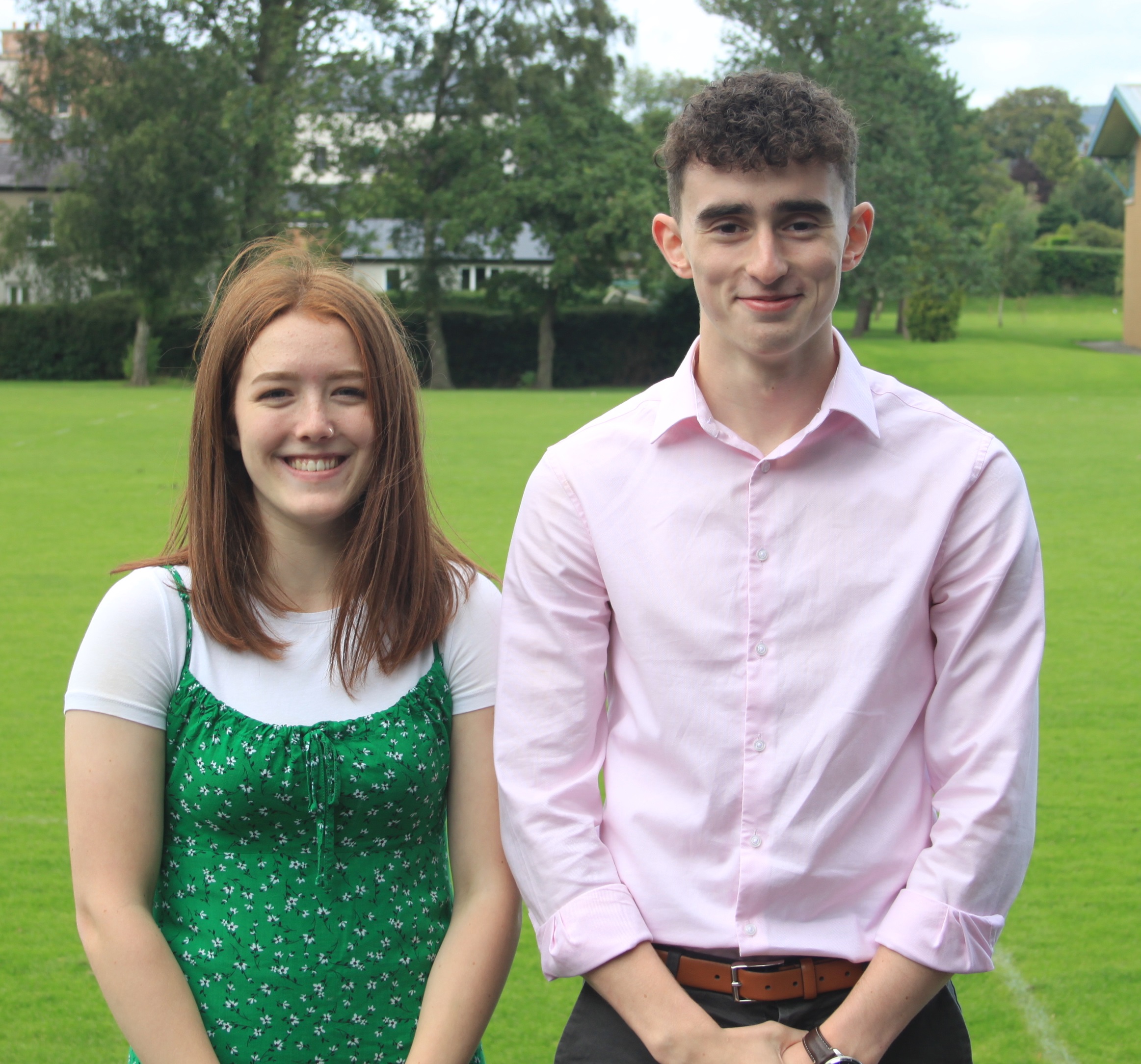 Friends’ A level students Joshua Lindsay received the Greer Cup and Louise Treacy was awarded the Manly Haughton Cup for top performance in their A-Level examinations. 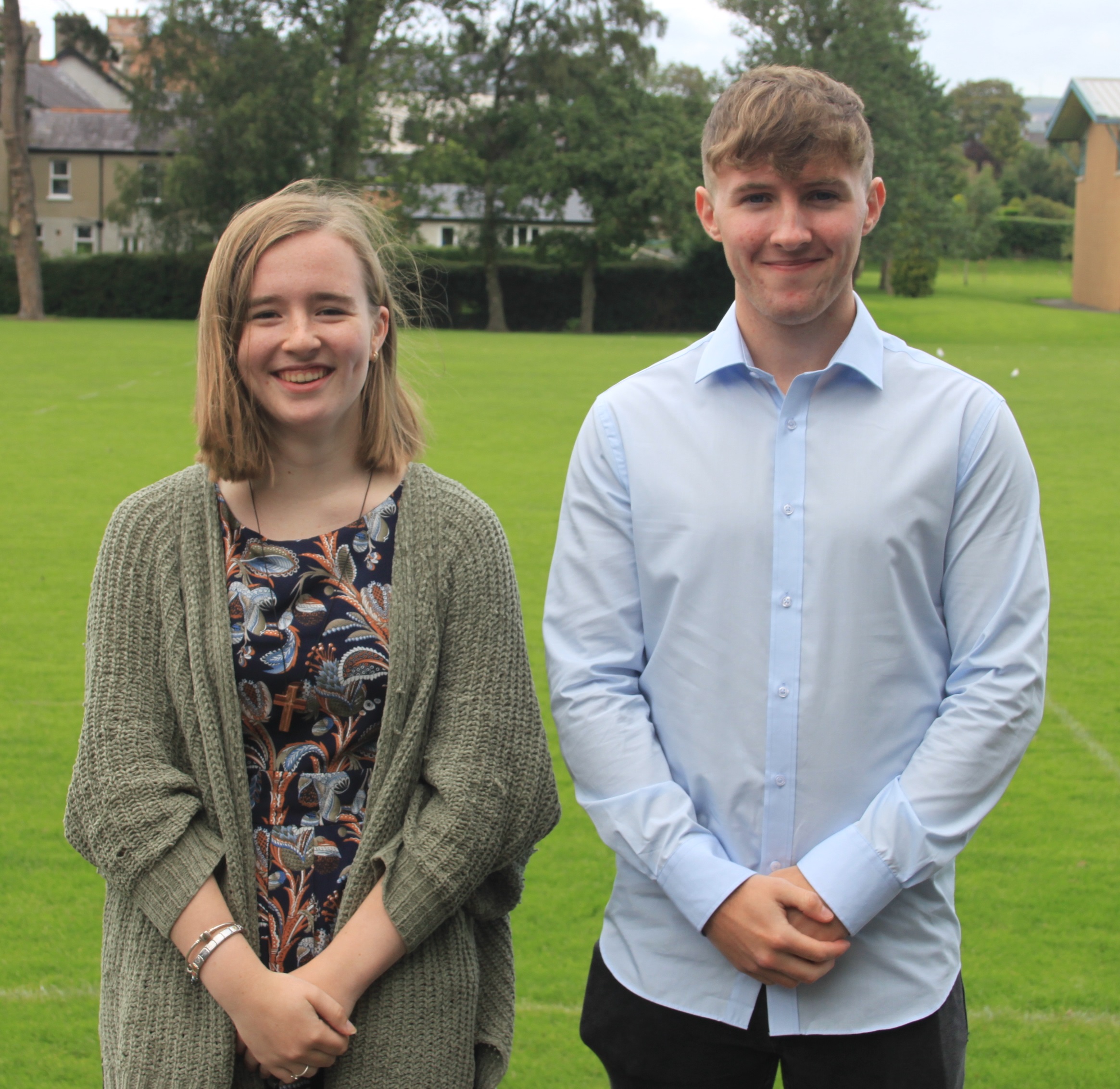 Sam Greer and Amy Laird received the Sinton and Dunwoody Prizes in recognition of their services to Friends’ School. 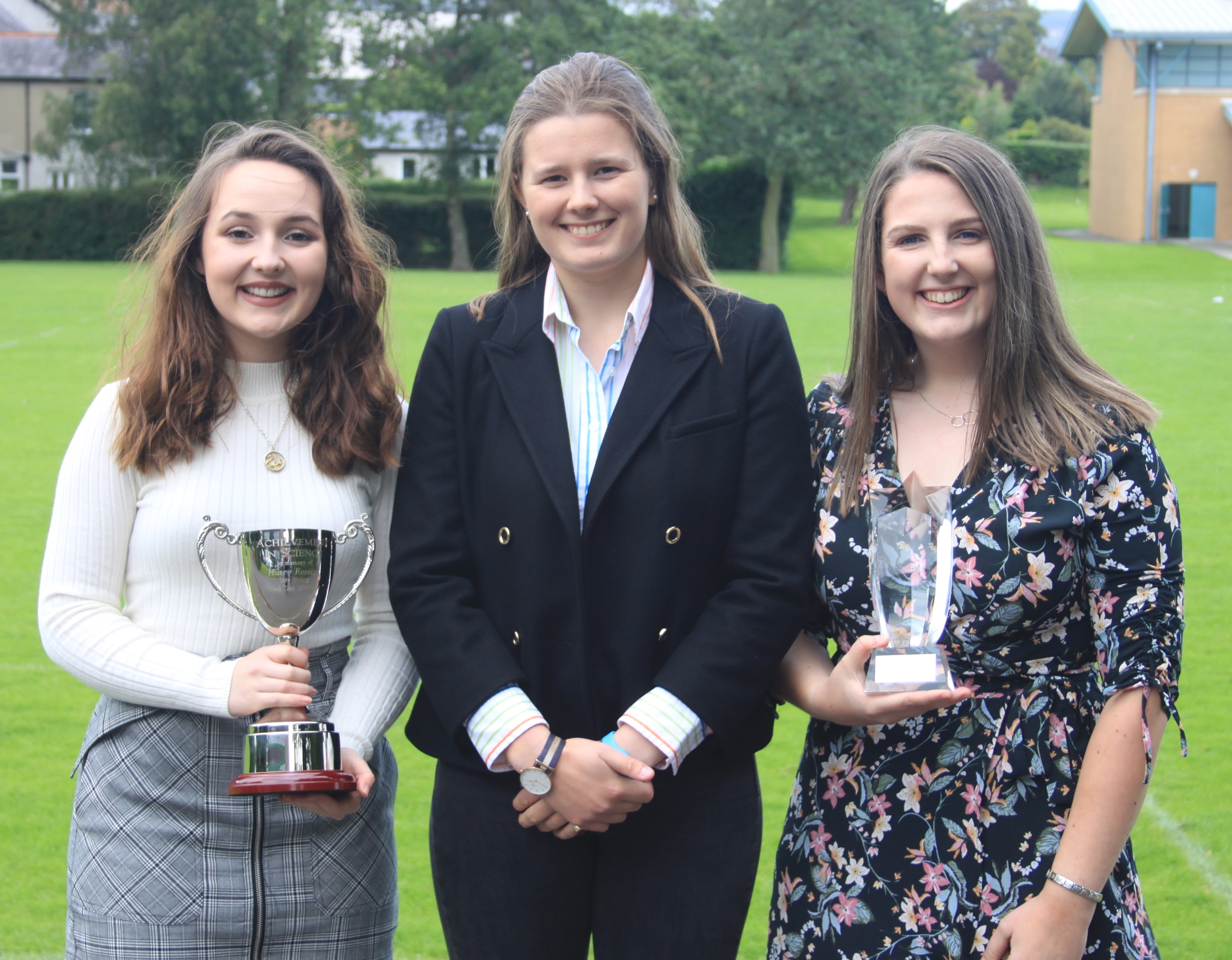 Rachel Acheson was awarded the Hilary Reseigh Cup for best overall achievement in Science at A-level. Emma Greer was awarded the Michael Thompson Sports Bursary who has achieved excellence in sport and Emma Kennedy received the Craig Lewsley Award for all-round contribution to school life 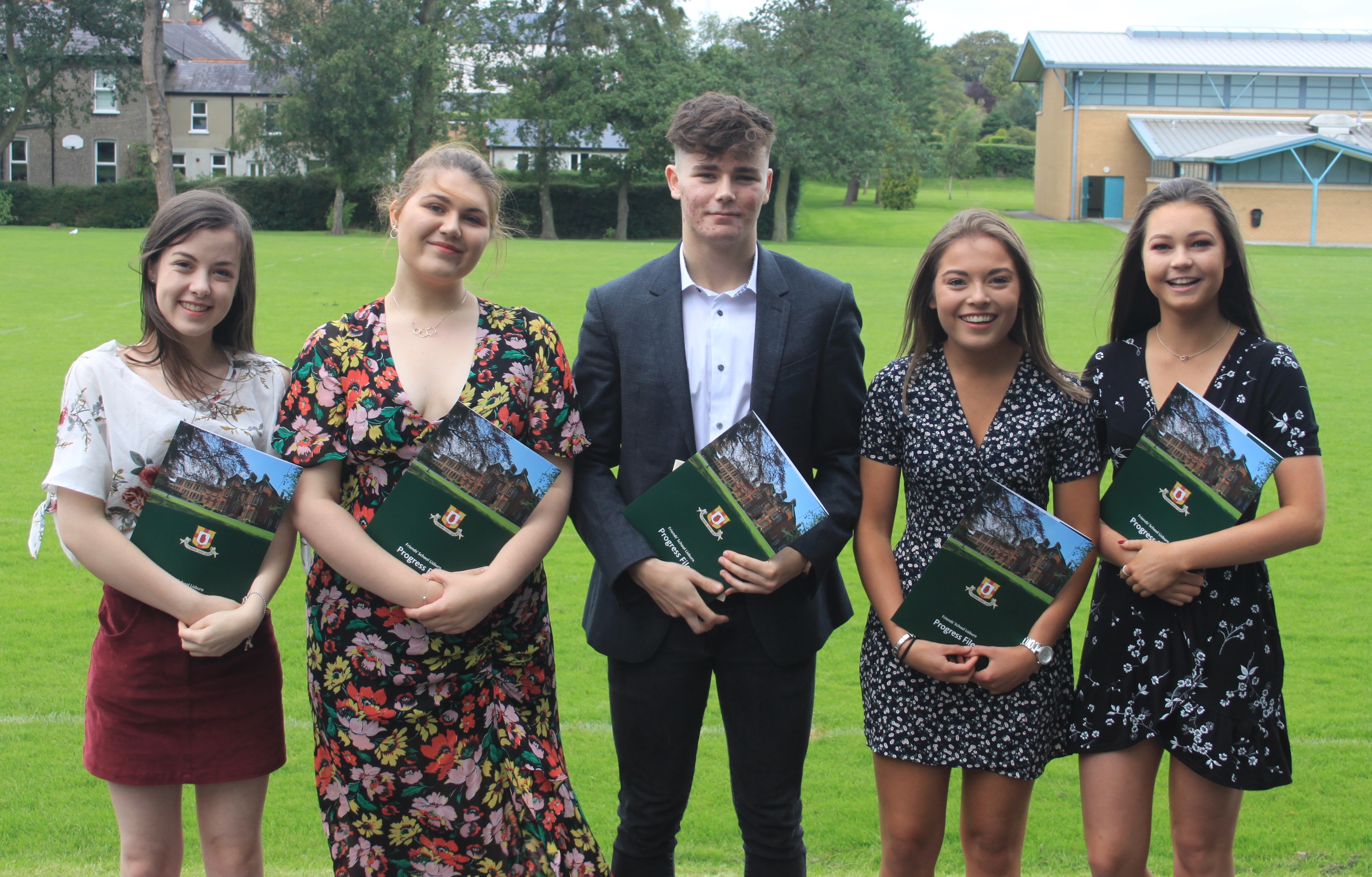 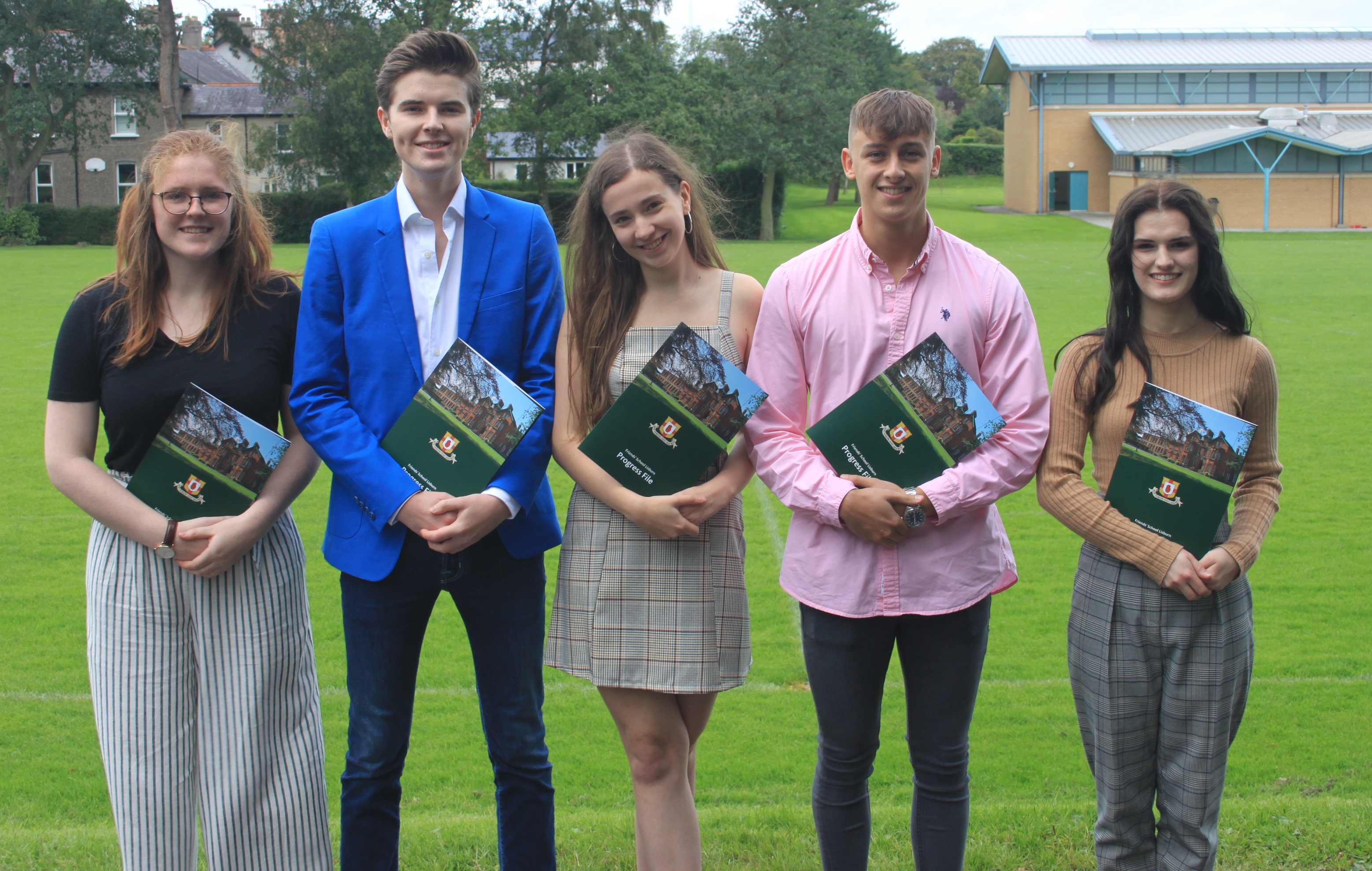 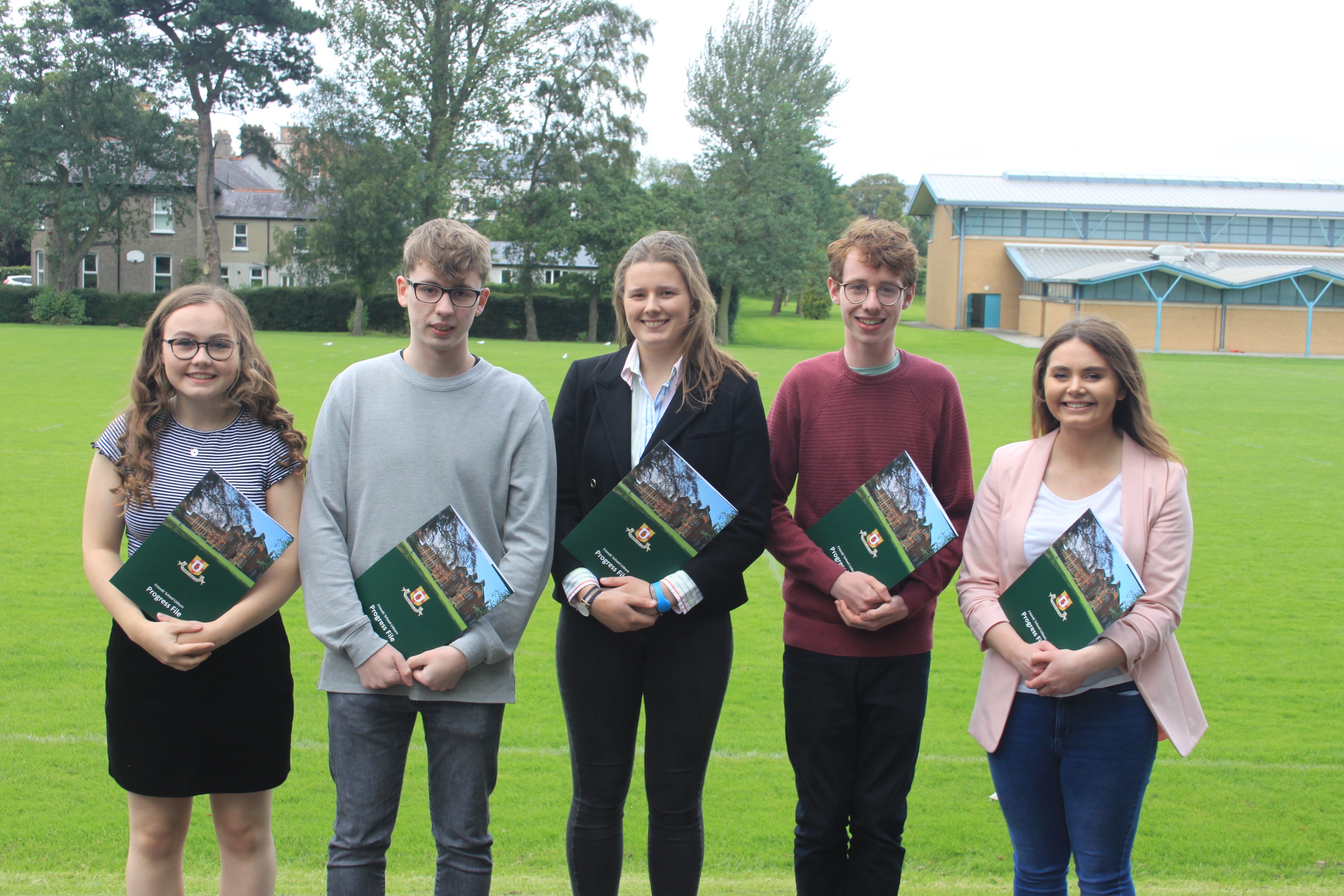 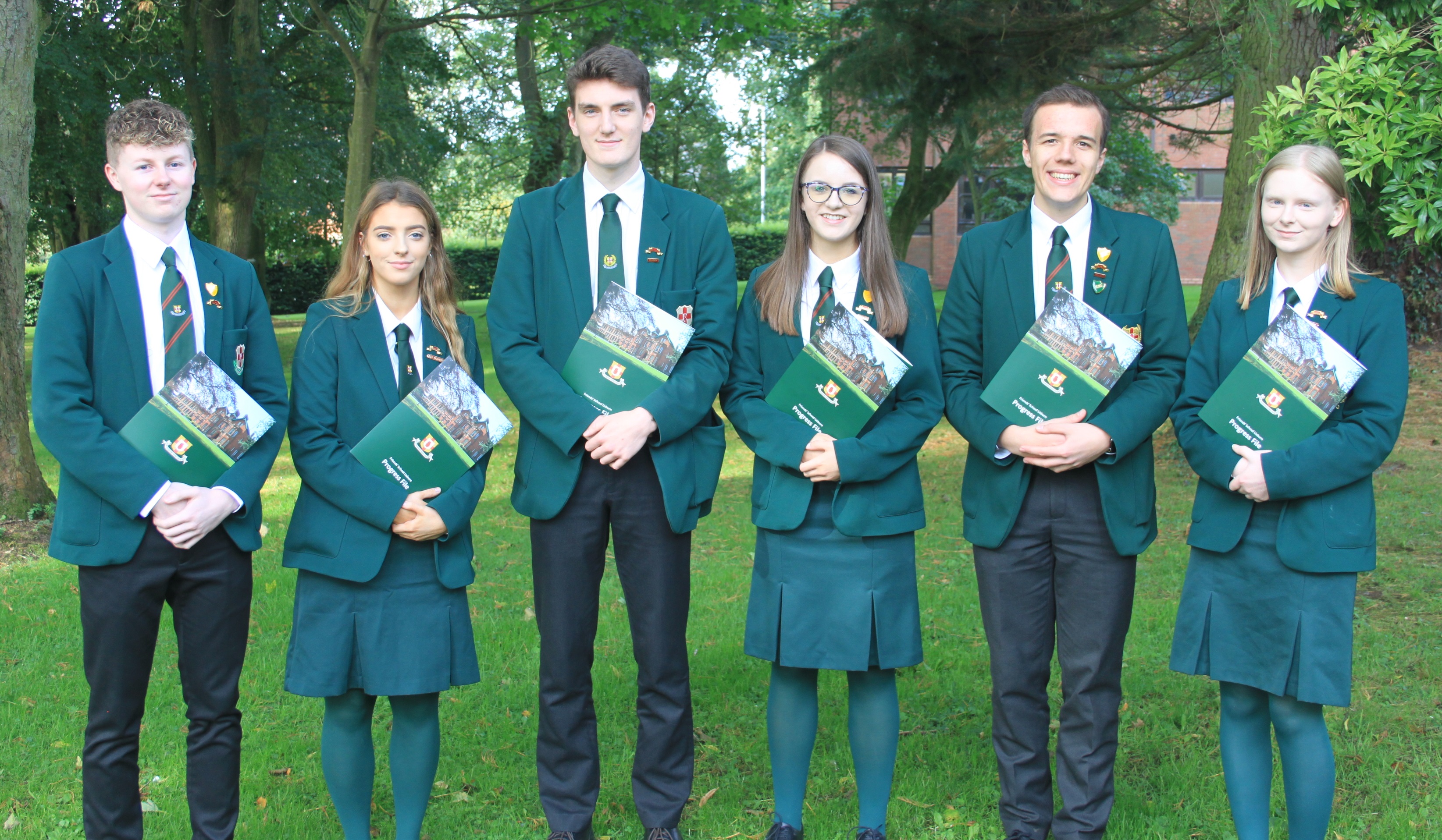 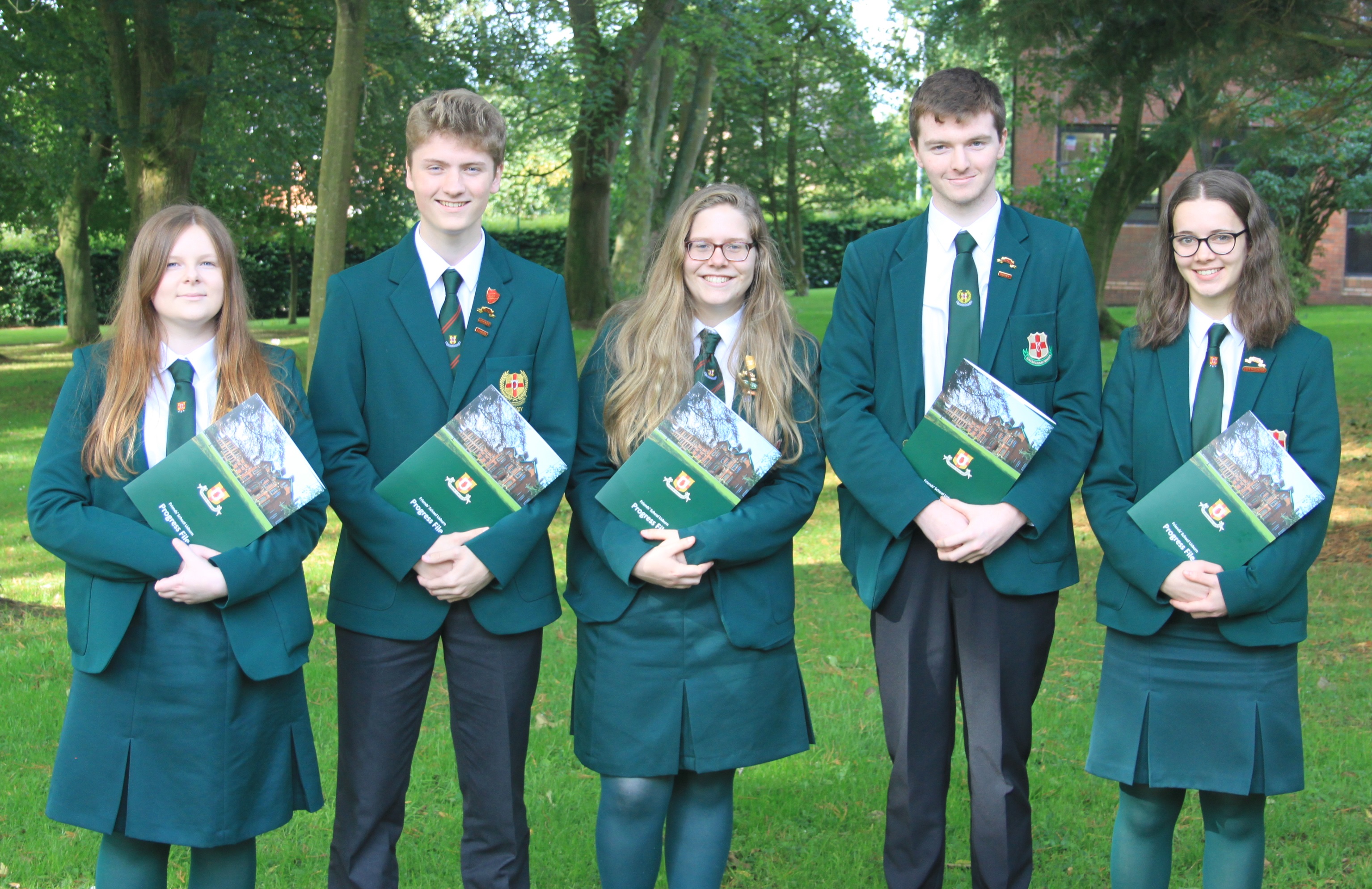 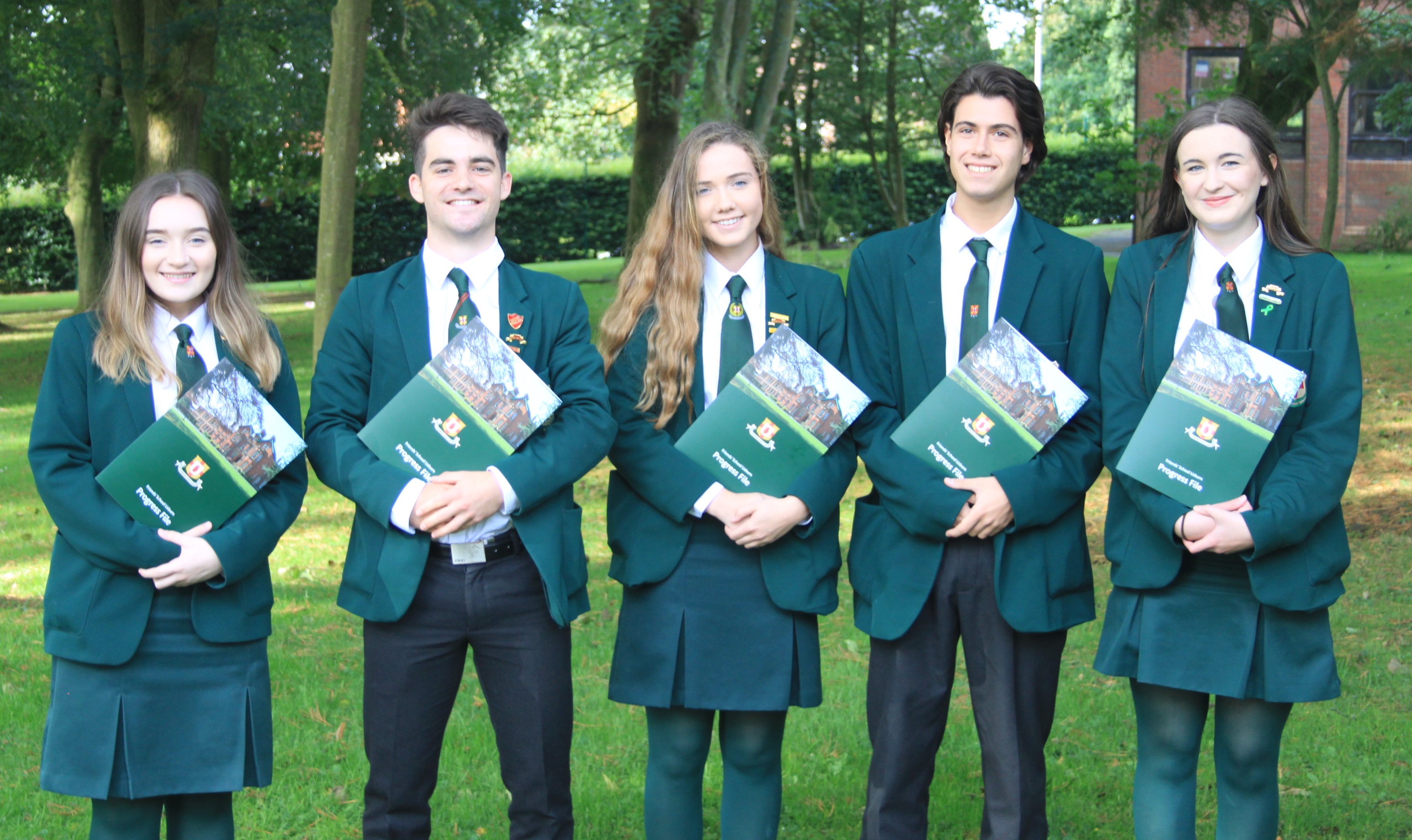 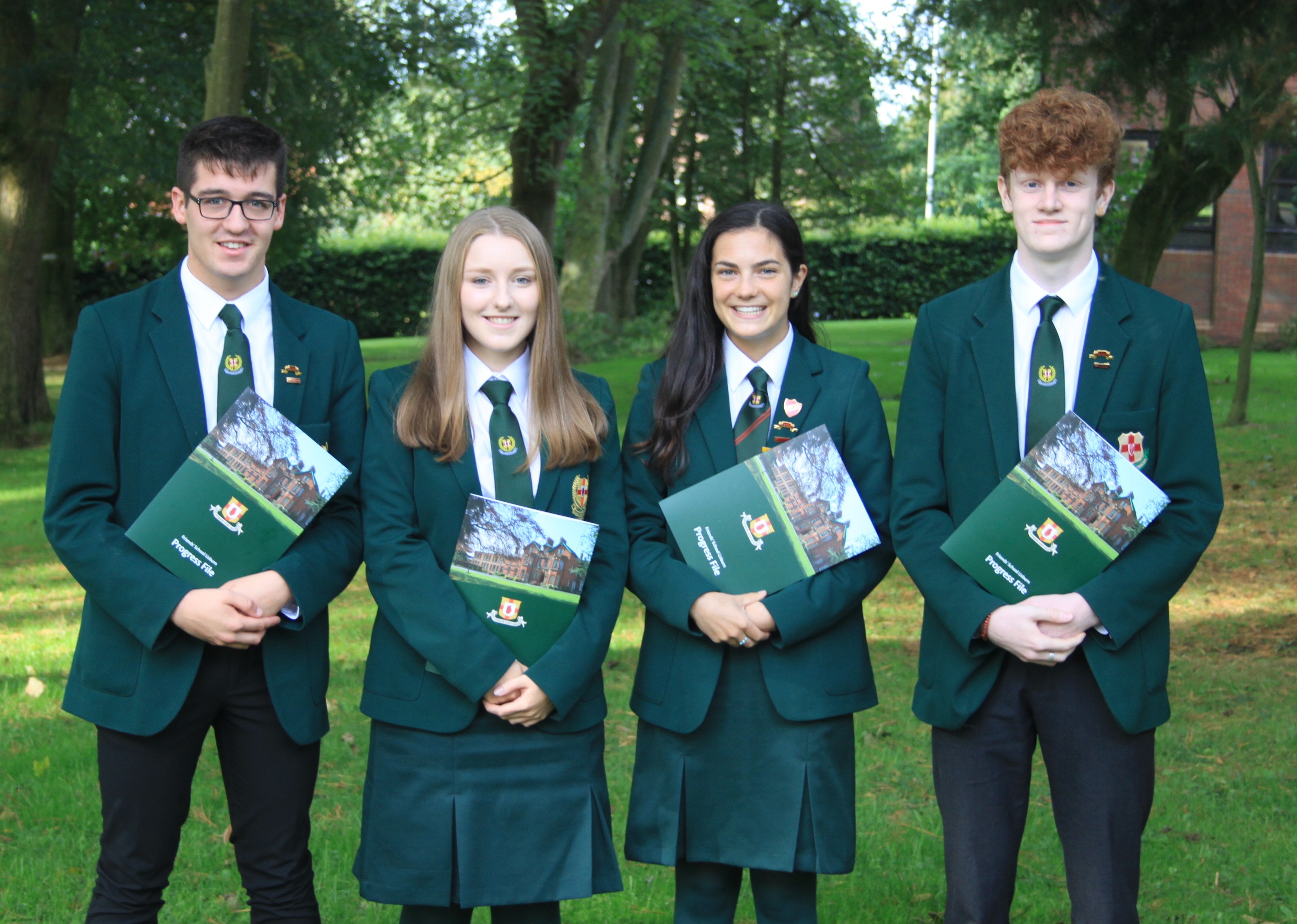 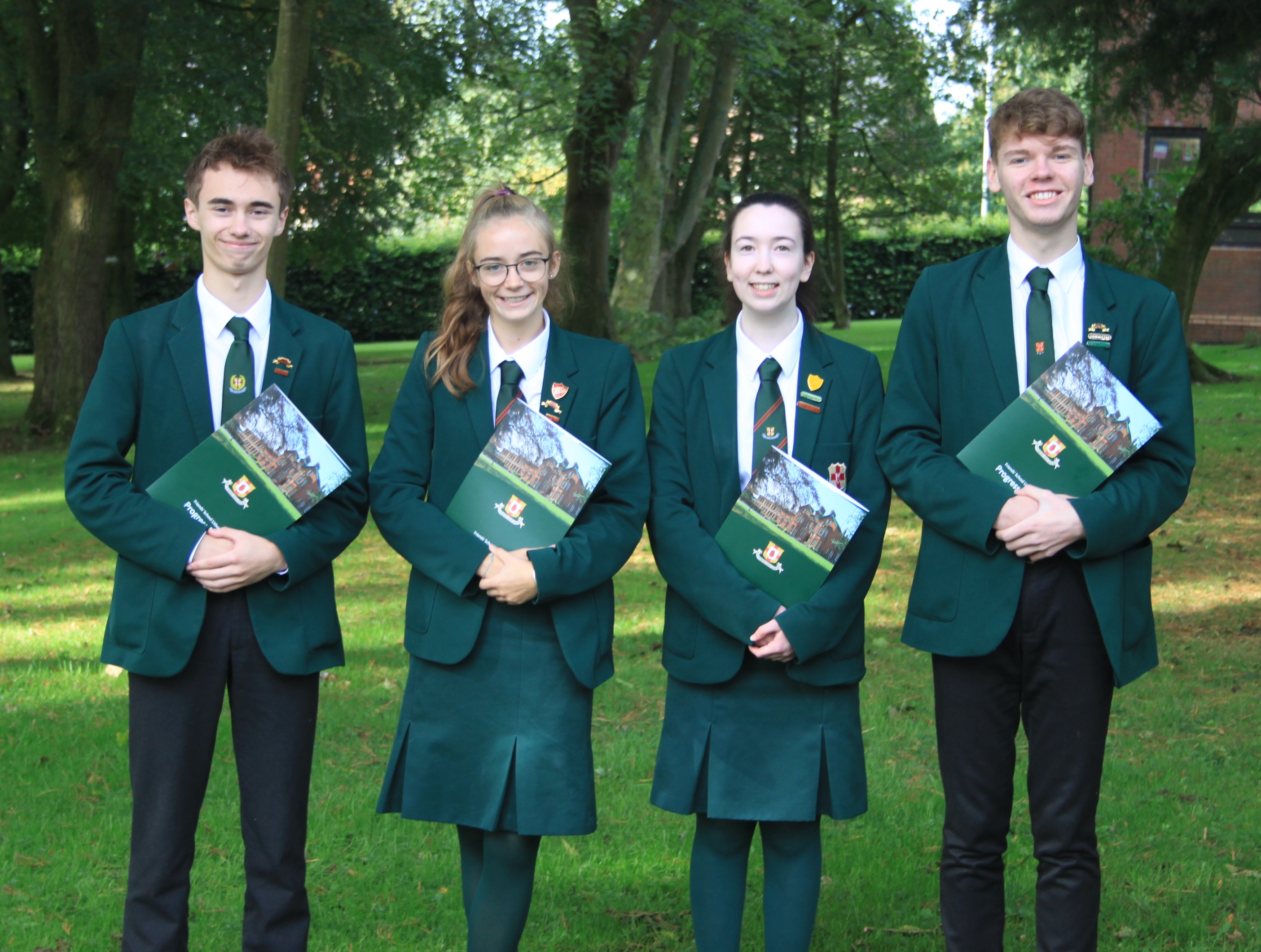